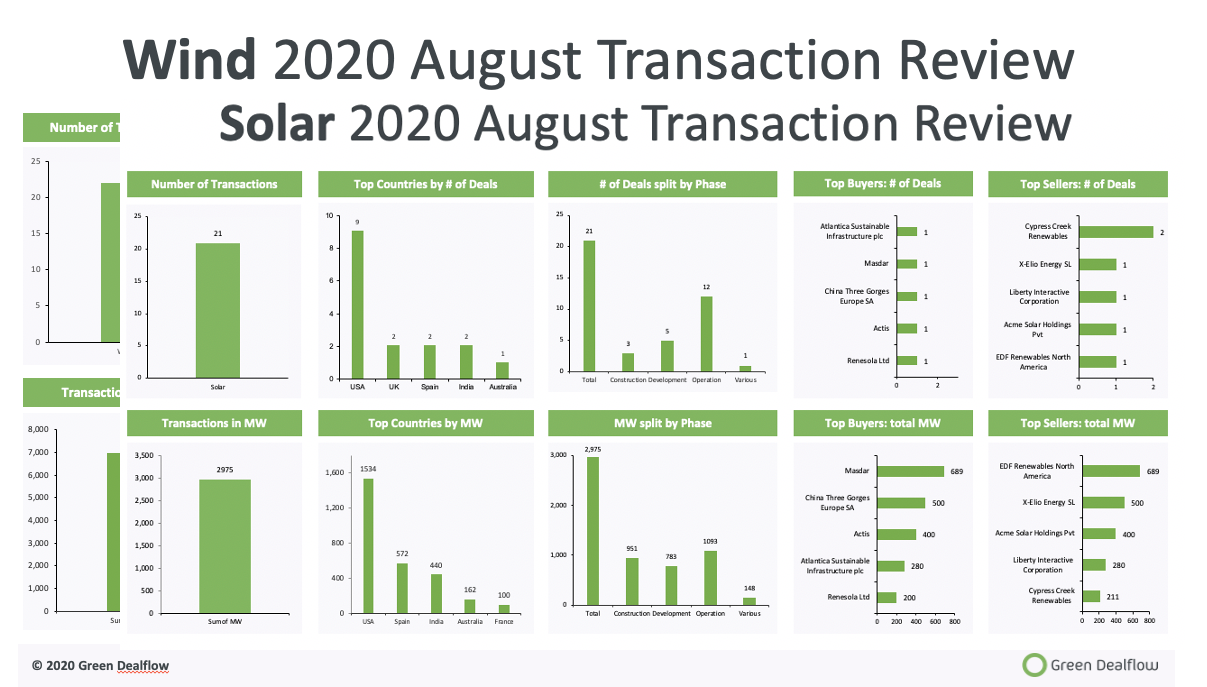 It´s again that time of the month, when Green Dealflow publishes its transaction activity report in the solar and wind industries for August that you can access here.  The Report is built on our transaction database, which tracks equity transactions of solar and wind projects from around the world and is given to our followers to understand where the market is going.

August is the time of the month in which offices close and everyone is spending family time at the beach, therefore our team was not expecting a lot of movement in the market. Our predictions were gladly wrong and this month all the attention was on renewables. Governments are looking at the industry we belong to as a leading path for the rebuilding of our societies. We are immensely glad to serve the purpose of greening the world. After this emotional introduction, let´s get back to business.

The renewable energy industries of solar and wind are still performing pretty well, setting our expectations for fall at a higher level than expected. In total, our analysts tracked 43 transactions, against the 45 of last July. The capacity transacted reaches up to 10 GW in both industries, 8 GW less than the past month, but still increasing after the spring numbers.  It seems to us, the green energy market has finally gained momentum! But what happened in the specific industries?

The solar industry´s performance this month is increasing with respect to the past 3 months, getting a total of 21 deals, with an overall capacity of 3GW. Among the most active countries this month, the U.S. remains our top country, but this time hitting the ceiling with 9transactions. This month we lack the presence of some European countries that were doing pretty good last month, beside the omnipresent Spain and UK. Australia and India entered our transaction database finally, after reading on the news the great job those governments were doing in terms of facilitating the penetration of renewables in the market. Among the several transactions, Masdar has announced its second strategic investment in the United States (US) in a deal with EDF Renewables North America that will see it acquire a 50 percent stake in a 1.6-gigawatt (GW) clean-energy portfolio in three utility-scale wind farms in Nebraska and Texas totalling 815 megawatts (MW), and five photovoltaic (PV) solar projects in California – two of which include battery energy storage systems – totalling 689 MW of solar and 75 MW of lithium-ion battery energy storage.

In the wind industry, the 7 GW transacted are showing a slight increase in comparison with the numbers of July. The deals signed were 22, more than in July and with an increasing interest around the developments of offshore wind, which have the potential to power most of our cities. In the top 5 countries, Brasil is leading the way, followed by the U.S., Spain, Australia and France. The last country has the biggest wind transaction on its side, with 2600MW performed by RWE. The portfolio includes different projects settled around Europe, including Spain, France, Poland and Sweden.

August was an emotional month, the increasing trend we were seeing in July, seems to have lifted off for real. Needless to say, we are excited to see where this winter will lead us, the several progresses in storage and offshore wind are at the focus of our days and you will hear more on those topic from us in the next weeks. Stay updated! 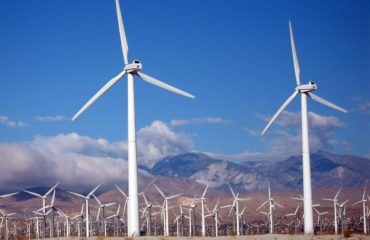 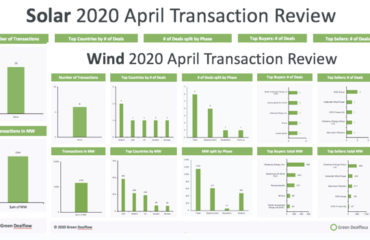 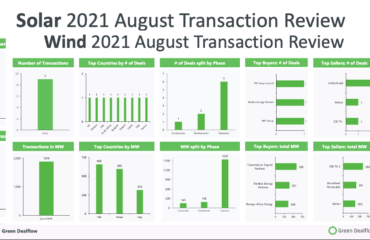